Squinting through tired itchy slits, I attempted to make sense of the blurred splashes of colour, light and form as they jerked and danced all round me. The panorama stretched out in super wide screen, like some bizarre Director’s cut that had been shot in black & white only to have dollops of coloured paint thrown at it. A week earlier (in an completely different life) this may have struck me as somewhat strange but by then, after three days of serious abuse, it was my mind’s whimsical habit of flashing up subliminal spectres of my earlier normality that really fucked with my head. 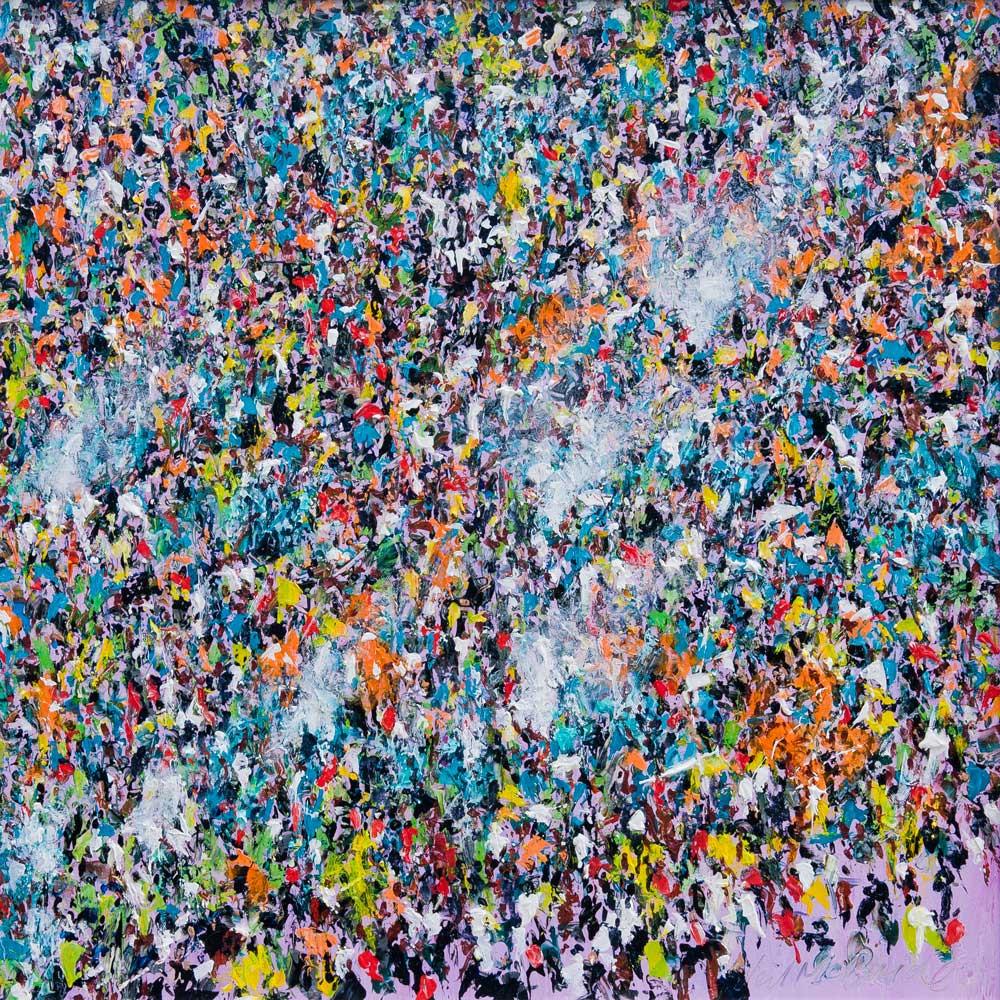 The harder I concentrated on the view, the more baffling it became. In the end I simply gave up and decided to just go with it. After all I reasoned philosophically, what could be cooler than being a character in a giant splodgy painting? The moment I stopped trying to work it out, the backdrop snapped into focus. It was like taking a step back from an impressionist picture and I was more than a little miffed to discover it wasn’t just a series of blobs after all!

This sudden explosion of visual clarity was accompanied by a roar as the soundtrack kicked back in, blowing my Monet to invisible dust. It was like Quentin Tarantino had burst into an art gallery and crashed it with light and sound. Stretching to the horizon, tens of thousands of people milled around tents like colonies of ants on Quaaludes.

Mostly they were arranged in tribal clusters around an astonishing variety of banners. A few were bright and colourful but many more were sombre, dark and threatening. It was dusk; and it was a cold, grey and damp one. Sporadic weedy fires struggled vainly to impose light and warmth on the scene, only to be frustrated by a persistent misty drizzle, which stifled the smoke at ground level and in so doing, created an eerie Arthurian atmosphere. Something in my substance addled brain kept signaling an instinctive but overwhelming sensation of malevolence.

The harsh mechanical scream nearby yanked me from my private and more than just a little disconcerting contemplation. I took in my immediate surroundings and remembered I was part of a singularly dodgy crew, encircling an equally dodgy banner. Beside me, Crusty exhaled with a sigh and grimaced theatrically as he waved his hand dismissively at a braying, cheering crowd some twenty yards away. He turned back with the pained expression of someone who’s been watching a man have an earing shot through his foreskin.

Nope, I could honestly have said I had absolutely no idea what – whatever what may have been – but what the hell, I nodded and grunted anyway.

“…It takes a special kind of dickhead to take a perfectly good bike and just kill it for absolutely no good reason. Y’know what I mean? I mean that really is fucked up!” He inhaled deeply, gave a slight shudder, and shook his head sighing sadly. I grunted intelligently again and followed his gaze back to the crowd.

As if to underline his point, our moment of quite reflection was shattered as the mega bike raced for the red line once again and the momentary respite of the rev limiter.

The ever-growing crowd erupted with fresh delight, inciting the poor pitiful bastard to still greater heights (or depths) of mechanical masochism. For a moment he seemed to hesitate – a flash of sanity perhaps – but the assembled throng were having none of it. They were on a roll and cranked the noise level up to eleven. Multifarious chants, in assorted languages urged him on. Was the poor pathetic little bastard going to disappoint them? Of course he wasn’t! He got straight down to business, like the Spanish inquisitor back from his tea break. Judging by the crowd’s response, you’d have thought U2 had ambled back onstage for a second encore after an extended tease. The awful banshee wail of the agonised engine was almost drowned out by the din – but not quite.

My ever so slightly unhinged mind tiptoed back to fantasy island. No crowd, the thought began, can entirely envelop the howls of the tortured. If their screams are overwhelmed, then an echo will escape. If not an echo, then the echo of an echo; the desperate victim vainly hoping that somehow, somewhere, somebody or something, may, on hearing their grisly suffering, be moved, and – if they possess a single iota of compassion – intervene.

In my stony haze it was all getting just a little bit fuzzy: Le Mans ‘94 or the Dark ages? Was there any compelling distinction? Come to think of it, what was really happening? The crowd was too far away and much too densely packed to allow any sort of view. I had a short, but ultimately fruitless wrestling match with my brain. I’d wanted it to check out my various sensory inputs, correlate available external data, to come up with some sort of discernible reality; whereas my brain wanted me to fuck off and stop bothering it. Oh, and while I was at it, could I pick it up Mars bar! That was its last message before it shut down like a recalcitrant HAL, leaving me alone with my chaotic confusion.

I closed my eyes. In the red tinged blackness I became aware for the first time of the cruel, almost sadistic tone behind the chants, cheers and laughter. Was it really just a mass produced lump of Japanese alloy getting its bollocks thoroughly screwed, or were the raucous swarm screening something altogether more sinister?

Could it be perhaps, that the agonised shrieks weren’t the dehumanised death throes of a motorbike? What if it was a person? A human being with flesh, blood, heart and soul. A living entity whose real furry dice were being slowly dissembled solely to satisfy the devastating blood lust of the mob, while I stood by frozen by confusion and mental inertia.

Rubbing my eyes with the palms of my hands, I tried again to see something through the mass of leather clad backs or to distinguish an individual sound from the cacophony that emanated from the throng. And there it was. As I focused on the appalling clamour, I’d made out the hideous sound of a sinew snapping as it gave up its desperate but totally futile resistance. There followed a dull sickening thud as yet another limb joined the mass of fly blown offal that would be coagulating slowly on the muddy floor…

Tumbling grumbling noises in the Transit behind cut in on my gruesome train of thought.

“Who’s making all that fucking noise?”

Digga groped his way to his knees, crawled across a pile of lethargically protesting bodies and spilled out of the van. He was not a happy bunny. Let’s face it he’d been having a much needed kip (his head lovingly pillowed on a speaker that for the last hour had been banging out around a 100 watts of Hardcore) and was not best pleased that some bastard – and quite likely a Frog bastard at that – had dared to disturb his slumber.

He stumbled over to join us, acquiring a joint en route, and followed our glazed stares, until he found the source of his irritation.

“What the fuck’s he doing? I’m gonna go over and poke him in the eye and tell him not to be so fucking stupid!”

His simple plan, unlikely as it was to see fruition, was greeted with enthusiastic nods and grunts of approval all round. He took a long slow draw.

I stared blankly at the crowd, trying desperately to ignore the battle between horror and confusion that was raging in my stomach. The forces of confusion had circled the wagons and were whistling to themselves hoping the horrors would just fuck off and stop taking advantage of the situation. But of course they wouldn’t. They came back in wave after wave. Confusion could see their red eyes glowing in the darkness as they massed for another assault. I decided that I understood how a woman must feel when she’s waiting for the inevitable next contraction and there’s fuck all she can do about it. A dull red glow wavered somewhere just in front of my eyes, which in my panic to find the focus button, pumped in and out like bellows. When the glow finally rested in something resembling focus, I discovered it was Digga trying to catch my somewhat divided attention with a joint.

I stared at it suspiciously. It occurred to me that the tabloids might be right. Perhaps the horrors hide in the smouldering tip. It could be that they sneak into your body when you put it to your mouth…

I was thinking maybe I should give it a miss and try to get a grip on reality. “Reality! Don’t go giving me any of that bollocks at this stage” said HAL rejoining the debate as abruptly as he’d left, “stick with relativity, it goes better with drugs.”

I smiled back at Digga, took the spliff from his shaking fingers and drank in the fumes.

“No, I was talking to myself.”

He squinted and eyed me suspiciously.

“You’re fucking mad you are!”

The smoke seeped slowly through my lungs and into my blood stream, before rushing to my brain and allowing the mellow glow to trickle reassuringly through the rest of my body. I smiled peacefully at the surrounding chaos while I reflected on his charge. In the middle-distance, the show had finished and the laughing mob had dispersed to reveal a teenager, scratching his acne and looking forlornly at a smoking Fireblade. My stomach taking advantage of the quiet moment, rumbled desperately for attention. I looked down and patted my middle age spread lovingly, stroked the sparse hair on my scalp and had a little chuckle.

“Yeah…” I said, turning back to Digga waggling my eyebrows and doing my best Jack Nicholson smile, “Relatively!”