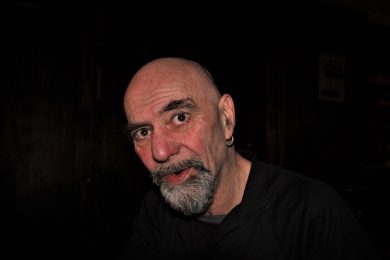 This morning I was all set to have my breakfast before launching back into the same old same old, in multiple arguments on Faceache, debating the relative merits of Boorish Johnson, Jezza Corbyn and Shitty Starmer (a red rose among two Establishment pricks if ever there was one).

The people I was arguing the toss with (once again in many cases, but not all) were a random mix of right wing Tories, soft Labourites, bikers and Brexiteers; with most of them ticking two or more of those boxes. But it suddenly dawned on me that all I was going to do was waste yet another Sunday morning typing out things that I’ve been repeating in one form or another since shortly after Corbyn’s name first appeared on the Labour Party’s leadership ballot six years ago.

My interest in politics was spurred by my accidental attendance at the legendary Rock Against Racism concert in Vicky Park in April 1978 (I was living just up the road in Upper Clapton and thought I might as well pop down there). I watched some great musicians – for free – and between tracks they were talking all sorts of good sense about all sorts of stuff, including racism, homophobia and misogyny that, if I’m perfectly honest, I’d never really given any serious thought to at that stage in my life – well I don’t suppose those subjects were covered very often on page 2 of The Sun (or perhaps they were and I just didn’t notice!).

Anyway the upshot of that chance encounter in East London was that by the time the General Election came around the following spring, everything that had been happening in the background throughout the previous decade while my hormones had been running things, told me that Thatcher was just about the worst thing that could happen to the ordinary working people of the UK – a group that it had never even occurred to me to question my membership of.

My understanding of politics and the largely slimy, self-serving and thoroughly unprincipled way it tends to work, took a major leap forward in 1995 when I became actively involved in the unrecognised trade union at my work and I ended up attending UNISON’s annual conference in Brighton.

I became part of a small Voluntary Sector group that included veterans like Caroline whose pedigree extended back beyond her involvement with the miner’s wives ten years earlier; they were people from a marginalised, invariably unrecognised sector, who had become used to fighting apparently insurmountable battles with intransigent employers and a trade union that seemed to be (and most of our group believed was) more interested in selling credit cards, holidays and insurance to its massive membership, than improving the lives of people working on way below minimum wage – before we even had a minimum wage.

Fast forward another ten years and I was outside Archway station, on crutches, handing out “Campaign Against Tube Privatisation” leaflets with Caroline who I had established across those years was the most staunch, principled and thoroughly committed socialist I had ever had the pleasure of knowing personally. So when Jeremy Corbyn – who I barely recognised at the time – dismounted his bicycle and came across the pavement to greet Caroline warmly and she responded in kind, I decided he had to be pretty solid. We were introduced and shook hands and I remember being mightily impressed that he sounded personally grateful for my efforts, rather than patronising when he told me to keep up the good work. After he rode off Caroline informed me he was very much one of the good guys.

Consequently when his name appeared on the ballot paper for Labour Party leadership, as the Blairites’ usual arrogant sop to the left of the party, to show how willing it was to embrace the entire membership and to offer them a meaningful choice (if you listened carefully you could hear them laughing up their sleeves), I paid my few quid so I could cast my vote.

Because of the bizarre way that time seems to compress as you as age, the events of 2015 seem to be only yesterday, but of course they’ll actually be very much be history – and therefore coloured by the distortion of time – for the Generation Z kids my boy Mackenzie’s age when they come to vote for the first time in 2024. Who knows what posterity will have to say about Jezza by then?

In my lad’s case if he’s interested to know what I had to say about him – contemporaneously – I’ll point him at the Politics tab at the top of the page ^^^ and tell him to read whatever he wants to and to come back to me if he requires clarification, or if he wants to question, dispute or object to anything that I’ve written. I’ll suggest that he pays special attention the the entry I wrote the morning of the 2017 General election so he’s never under any illusion about just how efficiently the media operates.

I’m sorry to have walked out in the middle my FB feuds, but I really have covered it all before on this site – and TBH I believe that I’ve managed to do so in a much more coherent manner than I ever achieve in the cut and thrust and fury of anti-social media. So if anyone reading this wants to offer anything by way of criticism, disagreement or heaven forbid agreement, you’re more than welcome to use the Reply box below.

2 thoughts on “Johnson/Starmer Vs Corbyn”