As he crested the hill and hit the downgrade Ron saw a comparatively clear stretch of motorway ahead of him. He tugged on the throttle of his CB550K and felt it take on a harder edge as it accelerated to 90mph. It had been a great run, motorway, man and machine as one. He was wired. Not jumpy, just completely tuned in to what he was doing, which was moving quickly alongside a mass of potentially lethal humanity in heavy metal boxes. 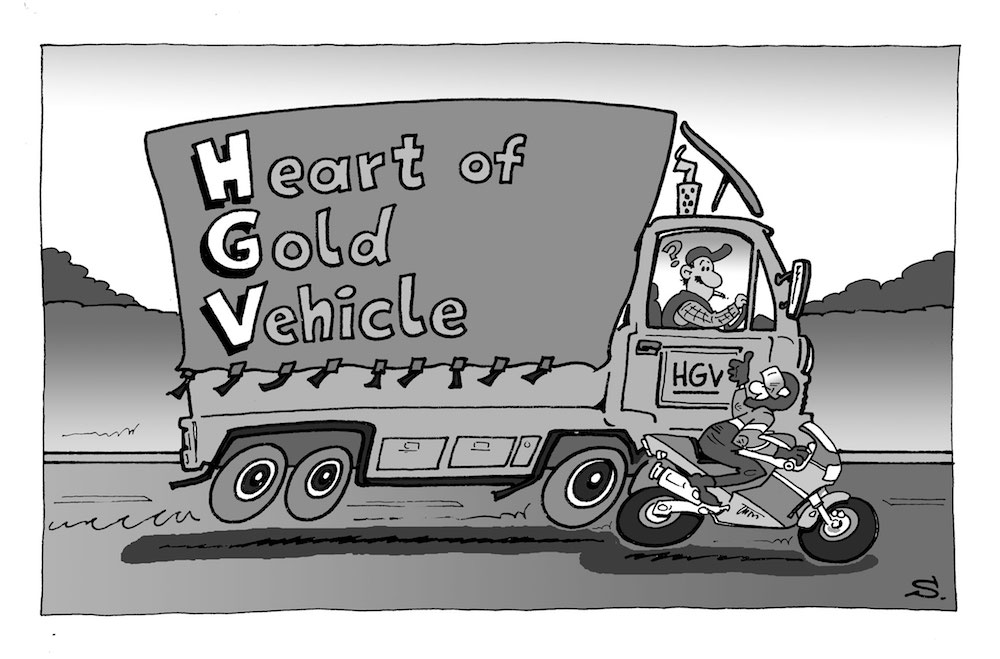 That’s why his adrenaline hit boost the very first millisecond that his front tyre exploded. From there everything moved in ultra slow motion as his well-tuned motorcycling brain raced into full survival mode. The bike went through momentary contortions which seemed to last for minutes but were actually over in a blur, before going into an enormous high-sider which threw him at the tarmac at a speed in excess of 80mph.

Ron holds an international racing licence so he knew there was nothing to do but let it all go loose and hope that it was only friction that slowed him down. As he skipped, bumped and slid along the outside lane of the M27, his eyes stayed with the bike as it pitched and ricocheted down the road. It did five complete flips as it went through its slow-mo ballet of destruction and he watched in awe as the tank crumpled flat in a single bounce. The fourth one took care of his girlfriend’s lid, which disintegrated under the weight of the Honda. He winced inwardly. In another half hour it would have been strapped to her chin, instead of the seat. The surge of relief that came with the realisation that whatever happened he didn’t have to worry about her, allowed him to forget for a moment that the only thing that was gradually slowing him down, was the grippy surface grinding away the flesh of his right hip.

A thoroughly seasoned brain in full alert mode is a wonderful thing. It’ll shift through your options in nanoseconds; but on a major artery the biggest danger facing you is all the motorway zombies steaming up right behind you — and they’re beyond your control. Clearly Ron’s defences decided they could do nothing while he was bumping and skidding at the sort of speed that human bodies simply weren’t designed for and that the best they could manage would be to focus on his rapidly mangling bike, to keep his mind off all the grizzly possibilities heading his way.

As he slowed, he wondered almost absently if any of the pain that rushed in from all points indicated injuries which would prevent him from running or diving for safety, but as he came to a halt and looked behind him all he saw was a couple of hundred yards of empty tarmac. Beyond that stood three lanes of stationary vehicles with hazard lights flashing and a tailback which stretched half way up the hill and kept on growing. Meanwhile a jam sandwich raced across the gap and ground to a stop literally seconds behind him.

While the police made him comfortable and coned off the area, they explained that they’d been they’d been nicking someone on the hard shoulder and had actually seen the puff of dust as his tyre burst so they were sprinting towards him with blues and twos going and calling for an ambulance, almost before he hit the ground. And the traffic? Apparently the driver of the artic Ron had just passed, must have also seen the tell tale dirt fly because he’d hit his hazard lights immediately and swayed across all three lanes of the carriageway, which had the desired effect of bringing the trailing traffic to a terrified screeching halt.

The police didn’t identify the razor sharp trucker, so Ron never got the opportunity to thank him. Which he regretted, because remarkably he was able to limp out of hospital eight hours later with a load of wadding stuffed in his right hip but nothing broken. He was under absolutely no illusion that the driver’s quick thinking and instant decisive action was the crucial factor which had ensured that his horrific spill hadn’t become a terminal tragedy.

At just a shade over 700 words, Ron’s Story is far and away the shortest chapter in The Carin’ Sharin’ Chronicles but it struck such a chord with so many riders that I thought it might be nice to share it with the wider motorcycling world.