On August 28th I shared another note entitled: “I was not angry until this instant”, which explained how incensed I was to have had my membership of the Labour Party rejected because of an unspecified “inappropriate comment” on Facebook two months earlier. I was finally informed what my offence was on September 7th and sent this appeal off the following day:

Now that I have finally managed to establish what it is that I have been accused of, I am appealing against the rejection of my membership because I cannot understand how it is possible, or even reasonable, to suggest that the evidence you have presented constitutes an inappropriate comment?
The letter I received informing me that my application to join the Labour Party had been retrospectively rejected stated:
“Labour Party should be the home of lively debate, of new ideas and of campaigns to change society. However, for fair debate to take place, people must be able to air their views in an atmosphere of respect. They shouldn’t be shouted down, they shouldn’t be intimidated, and they shouldn’t be abused, either in meetings or online.” 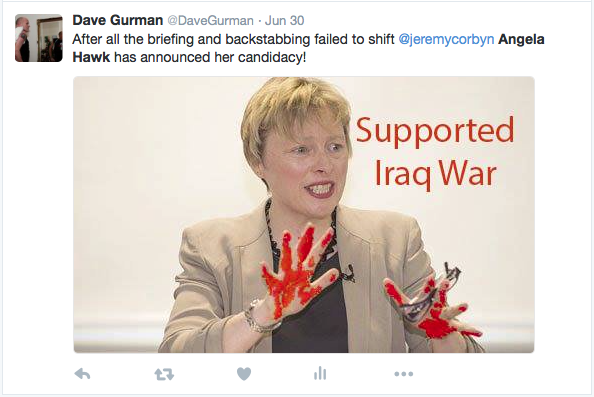 As far as I am concerned sharing a photograph of Angela Eagle with blood on her hands and a caption stating (accurately) “Supported Iraq War” accompanied by “After all the briefing and backstabbing failed to shift @jeremycorbyn Angela Hawk has announced her candidacy!” was a perfectly legitimate comment on June 30th because:
Respect, as I have taught my five children (four of them all grown up) and the hundreds of young people I worked with in a social work career that spanned over twenty years, is a two way thing. Consequently it is essential that those who demand it, show it to the people they expect it from, which certainly hasn’t been my experience in the discussion around Jeremy Corbyn’s leadership. I and hundreds of thousands of other likeminded people have been dismissed as ‘Trots’, ‘Corbynistas’, ‘cultists’, and even ‘Nazi Stormtroopers’ by all and sundry – including prominent figures within the party – and to the best of my knowledge none of their memberships have been suspended.
However, in spite of considerable ongoing provocation I haven’t shouted down, abused, threatened or intimidated anyone in the anti-Corbyn camp, in person, at meetings or online, so I fail to understand how this rejection can be justified.
I am a firm supporter of the Labour Party’s principles and policies, particularly as espoused by its current democratically elected leader and have been looking forward to becoming an active member of my local CLP and fully intend to do so once this has been cleared up.
Yours faithfully
David Gurman
Please follow and like us: